The Underwater Archaeological Park of Baia

Did you know that there is an underwater world where nature and history coexist perfectly? Let’s discover it together in a fascinating journey between past and present.

The Archaeological Park of Baia is a spectacular example of what bradyseism has relegated forever to the seabed. A phenomenon linked to secondary volcanism, bradyseism is typical of the Phlegraean Fields and is especially widespread in the Gulf of Pozzuoli, affecting the area from Cape Miseno and Baia to Posillipo. The term bradyseism derives from the Greek βραδύς bradýs, ‘slow’ and σεισμός seismós, ‘shock’. Bradyseismic movements can repeat themselves in cyclical phases and, in particular, Phlegraean bradyseism has undergone the following cycles since the 2nd century BC: descending, ascending, then descending again.

A priceless combination of archaeology and the sea, where flora and fauna coexist with precious mosaics, remains of walls and statues. A thin layer of sand has wrapped a substantial stretch of coastline like a delicate mantle. This submerged portion forms a continuum with the complex that shapes the Archaeological Park of the Baths, which once overlooked Lacus Baianus, a smaller bay than we can admire today.

There are numerous hidden treasures of unparalleled beauty. The Underwater Park of Baia is a Protected Marine Area established in 2002 by an inter-ministerial decree involving the Ministry of the Environment, the Ministry of Cultural Heritage and Activities, the Ministry of Infrastructure and Agriculture, in agreement with the Campania Region. 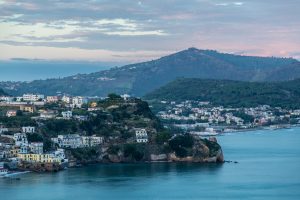 Originating from a volcanic eruption some 8,000 years ago, Baia is named after the famous companion of Ulysses, Baio, who, according to legend, was buried here.

The bay of Baia was dotted with suburban seaside villas as early as the Republican era. Because of its mild climate, breathtaking scenery and the benefits of the thermal waters, Baia became the favourite holiday resort of the Roman aristocracy, illustrious personalities and several Roman emperors. Among the most famous summer residences were the villas of the Scipioni family, Julius Caesar, Cicero, Pompey the Great and Mark Anthony. Baia is famous for its imperial palace, where Augustus, Tiberius, Claudius, Caligula, Nero, Hadrian and Severus, among others, stayed. Numerous Latin authors, from Horace to Propertius, Ovid and Martial, as well as Pliny the Elder, speak of Baia as a place of worldliness, well-being and health. The sinking led to the abandonment of the villas and the area but, at the same time, preserved the remains of this ancient treasure to this day.

Origins of the Underwater Park 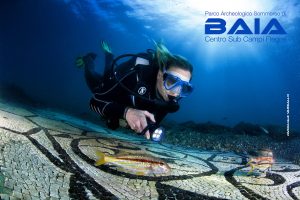 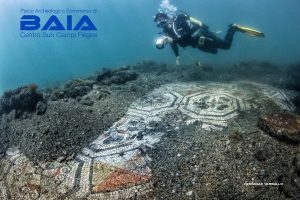 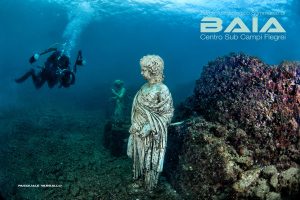 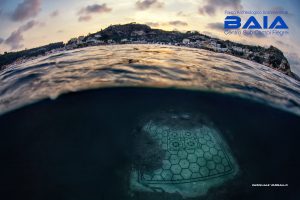 At Punta Epitaffio, in 1969, two marble statues were accidentally found with their heads damaged by Lithophaga lithophaga, a species of mollusc. They were Ulysses and his companion Baio. Later, in the early 1980s, excavations brought to light a rectangular room with an apse, presumably a nymphaeum-triclinium. The apse included housings where the statues mentioned above were attached. Along the walls, inside the niches, statues of emperor Claudius’ family members, his mother, Antonia Minor and one of his daughters. Thanks to a delicate intervention to restore and preserve them, the statues and part of the architectural elements have been saved and kept in the Castle of Baia. Visitors can appreciate what the sea swallowed up some two thousand years ago in a fascinating, almost life-size reproduction of the submerged Nymphaeum. 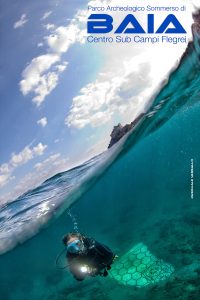 In the park, which boasts 178 hectares, you can take a boat trip with a transparent bottom to appreciate the seabed and its wonders. Scuba diving and snorkelling and several underwater itineraries are proposed in a unique and suggestive atmosphere. The myriad of fish will surround you during the marvellous discovery of mosaics, statues and the remains of villas dating back to the imperial era. Some of the excursions on offer include the Underwater Nymphaeum of Claudius, the Villa of the Pisoni family, the Villa a Protiro, the Portus Julius and the Secca delle Fumose. Moreover, you will admire Roman Peschiere (or Roman fishpond), in the depths below the Castle of Baia, and the Villa of Lucullus near Miseno, just a short distance from the Park. It will be one of the most exciting experiences that lovers of the underwater world will.

Flora and Fauna of the Underwater Park

The biodiversity of the Marine Protected Area seabed is remarkably rich and varied. Its numerous microhabitats result from various natural phenomena ranging from bradyseism and marine erosion to marine emissions that have crossed over with human activity, particularly the construction of buildings, jetties, and fish farms.  Yellow tufa cliffs along the coast are combined with sandy bottoms and a rich accumulation of detritus. The submerged structures are a refuge for numerous species, including octopuses and rockfish such as wrasses and sparids. On the soft seabed, unique specimens of Pinna Nobilis, the largest bivalve in the Mediterranean and a protected species. Furthermore, the warty venus is a delicious edible mollusc that safeguards archaeological remains. Flora and fauna coexist in delicate and unusual harmony with the submerged Roman works. They seem to be under a secret spell. A unique adventure that you should not miss!

The Underwater Archaeological Park of Baia is just 4 km from Al Chiar di Luna and is easily accessible by car.

For a snorkelling excursion, we recommend Centro Sub Campi Flegrei. 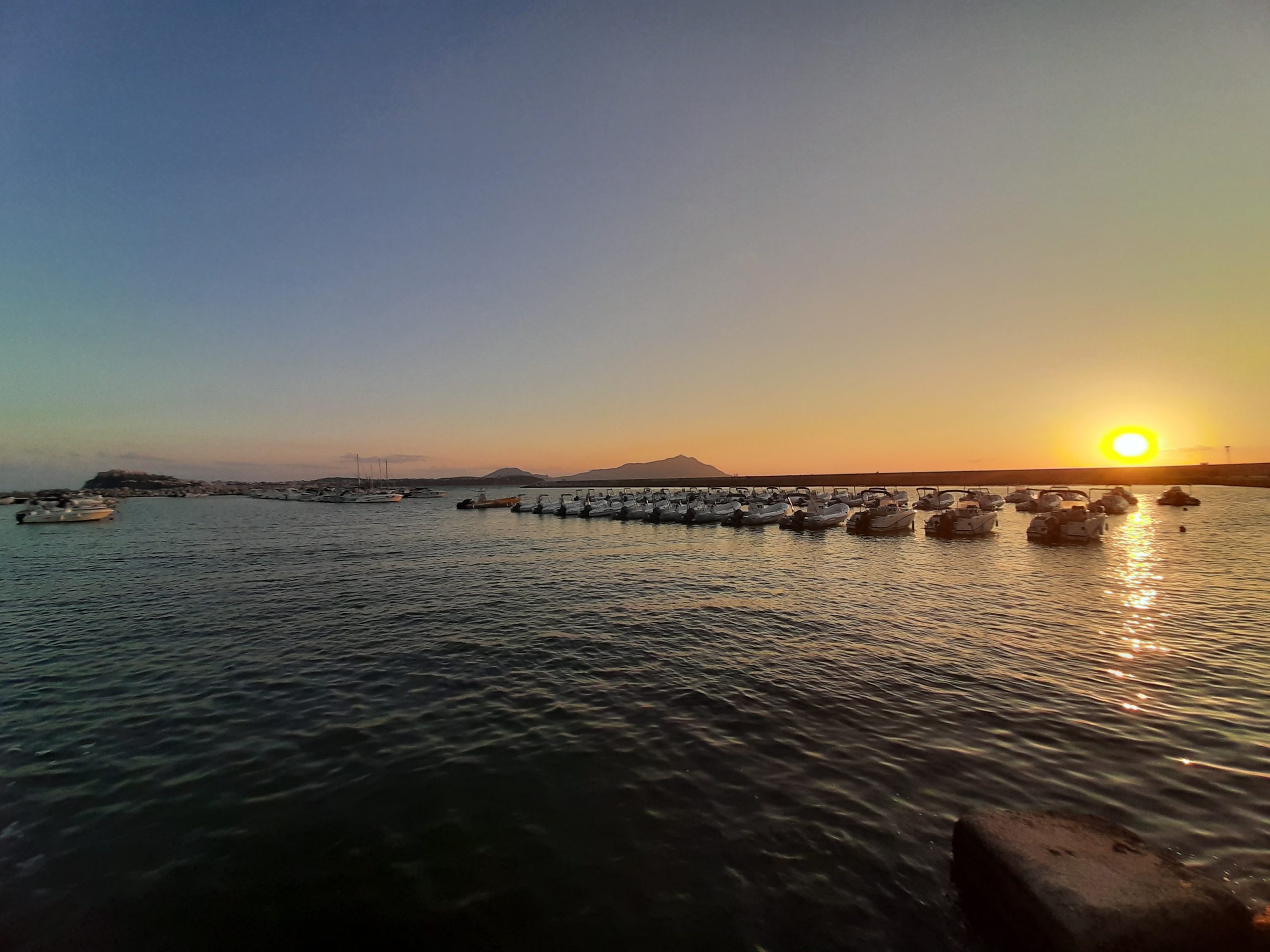 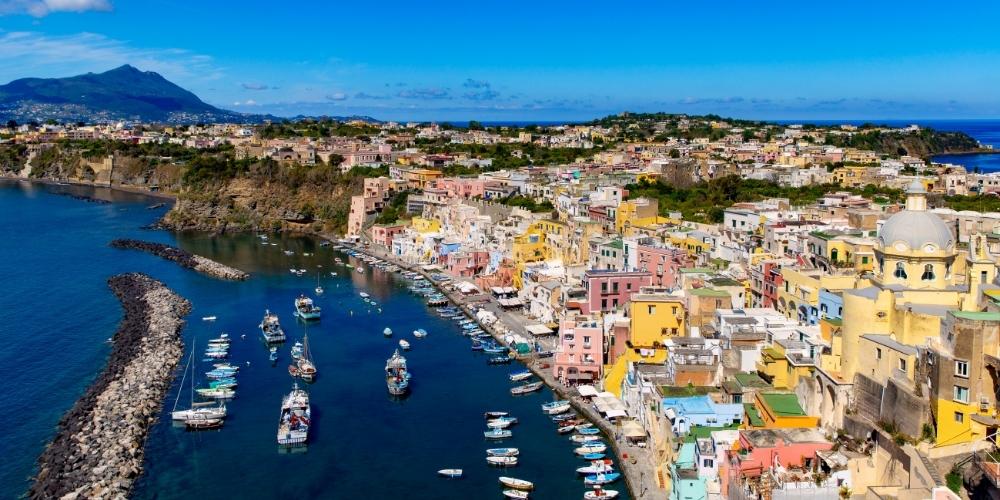 PrevPREVIOUS POSTArco Felice: an authentic example of Roman engineering from the 1st century AD
NEXT POSTThe Archaeological Park of CumaeNext
YOU MIGHT ALSO BE INTERESTED IN 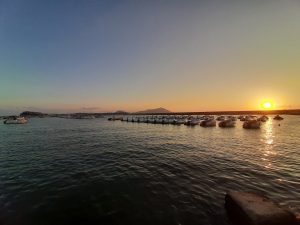 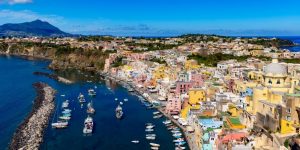